This case study came from an article in Sailing Today, We are pleased to say that the panel in the article was bought from us via one of our sister sites.

In the article, the proud new boat owner had bought a boat without electrics. He needed a solar panel to provide charging power to his 12V battery so that he could operate his LED cabin lights and depth sounder.  His plan was to liveaboard during the summer months.

The boat owner wanted to use his LED lights for roughly 3 hours a night. The magazine article doesn't give exact figures so we Googled marine LED lights and found some rated at 35mA each (0.035Amps).

Again, no specifics in the article, so back to Google. We found the in-dash Humminbird HDR 650. This operates at 12V and according to its manual, has a current draw of 60mA (0.060Amps). Let's assume the depth sounder was used for 8 hours a day.

With the nav lights barely used, we'll ignore them for the moment.

So total power requirements per day for the lights and the depth sounder = 8.28 Watts

Now in the winter, we only get about 1 hour a day of full sunlight. This means the panel would have to be rated at greater than 9W for use in the Winter months.

In the summer that goes up to 4 hours a day, but let's stick with 1 hour and assume our boat owner has picked a very overcast season for his sailing.

The boat owner wanted a flexible panel which could be rolled up and stowed away when not used. 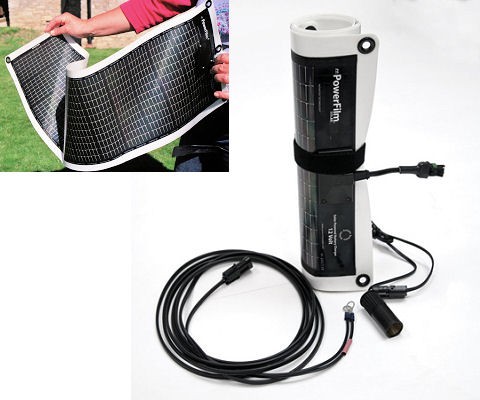 A perfect fit for this was the 14 Watt R14 Powerfilm rollable solar panel.  This panel includes a blocking diode which prevents the solar panel from discharging the battery at night.

Fixing the panel in place:

The panel has holes in each corner which means it can be fixed with fasteners to a deck, cabin top or a bimini (using canvas fasteners).

It can also be glued (or fixed in place with velcro). The boat owner decided to lash his to the cabin top with bungee cords.

Filed under: General News, New Products, Items in use Posted at 13:38